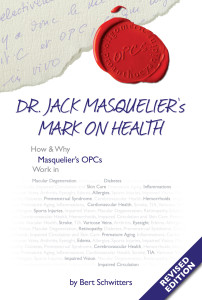 On February 2009, the legendary and amiable French scientist Jack Masquelier passed away at the age of 86. He was one of the great pioneers in the fields of phytochemistry and human health.

In July 1948, Jack Masquelier published his doctorate thesis upon the successful isolation and chemical description of the phytonutrient we know today as oligomeric proanthocyanidins or OPCs. In that same year, he filed a patent for the industrial method of producing the first botanical product based on OPCs.

Based on Dr. Masquelier’s groundbreaking and always innovative role in the research and development of OPCs-products, their isolation, identification and therapeutic, nutritional and dietary applications, two other botanical products followed. In the 1960s, a botanical medicine based on OPCs isolated from Pinus maritima bark saw the light of day, followed ten years later by another OPCs-based medicinal product manufactured from Vitis vinifera seeds. In France, these medicinal products are still sold today. During the 1980s these complex but well characterized phytonutrients were introduced on the natural products market. Today, Masquelier’s OPCs are sold around the world as dietary supplements.

The postwar period, when Masquelier began his research, was marked by a surge in interest in flavanols, the group of bioactives to which proanthocyandins belong. In 1951, Australian scientist W.G.C. Forsyth first isolated flavanols from fresh coco-beans. In that same year, using Masquelier’s OPCs, the English phytochemist E.C. Bate-Smith, working at Cambridge (UK), developed and first described a coloration method to detect the presence of proanthocyanidins in plant materials.

Masquelier’s scientific work was seminal in the early development of two areas of science: phytochemistry and human health. Finding that the nomenclature used in the fields of phytochemistry and botany could easily lead to confusion and imprecision when applied in the field of dietary and pharmaceutical products, Masquelier, together with his lifetime friend and colleague Dr. Jean Michaud, focused on, and succeeded in the characterisation of OPCs-based compounds in conformity with nutritional and pharmaceutical standards commonly applied in the field of human health.

Through tireless scientific investigation, Dr. Masquelier revealed the numerous health benefits of OPCs. The key early finding of Dr. Masquelier was that OPCs strengthen and protect blood vessels and vascular function, so essential for the function of every organ in the body. This set in motion an impressive series of independent clinical studies by several other scientists that sustained Dr. Masquelier’s findings and provided conclusive support for the use of Masquelier’s OPCs-compounds in the French vasculo-protective medicines.

In 1985, Dr. Masquelier was able to further explain the intense and instant positive effects that OPCs have on the human body when he discovered that OPCs neutralize free radicals, the common cause of seemingly unrelated degenerative conditions and early onset of age-associated changes in the body. He found that OPCs are powerful antioxidants and are unique in their ability to work in both aqueous and lipid phase to provide superior antioxidant support.

All of Dr. Jack Masquelier’s discoveries have greatly influenced human health worldwide, especially since, during the 1990s, his OPCs compounds became available as food supplements in Europe, America, Canada and the Far East.

Although life expectancy has increased, it is accompanied by an equally dramatic increase in cardiovascular and other degenerative diseases. This is why Masquelier’s work and the compounds embodied in medicinal, nutritional and cosmetic products have grown in relevance in a world that has fundamentally changed since their discovery.

The first edition of OPCs, Dr. Masquelier’s Mark on Health was published in January 2004, when Dr. Masquelier was still alive and well. The changes made in the 2015 edition reflect the fact that he is no longer with us. Other than that, I have included the many scientific developments that took place since 2004 in this fully revised edition.